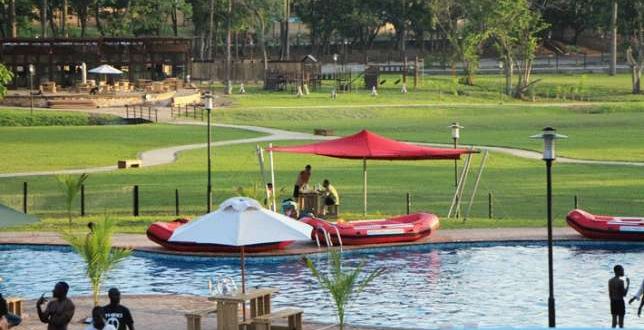 I have not seen such a serene expanse of natural green land as beautiful as garden. Agodi garden is a tourist attraction centre in Ibadan with a serene and beautiful environment.

Agodi garden which sits at the foot of Old Mokola Hill was established in 1967 and has enjoyed its fair share of history over the years. Formerly known as Agodi Zoological and Botanical Gardens, the garden was wiped out by the historic Ogunpa flood disaster in 1980 and lost most of its wildlife. The garden was renovated in 2012 and was reopened in 2014 and has attracted and keep friends, families and groups happy ever since.

Agodi garden has waterparks, lake, and mini zoo, playground for children as well as beautiful garden for all and sundry.

The beautiful work of has green gardens coupled with attractive forestry which makes it one of the best places to relax and have fun.

Families and friends can’t get enough of this garden has its serenity, ambience and lushness can’t be compared to any.

In addition, you canexplore the mini zoo and check out the waterpark, as well as enjoy a boat ride with friends.

Of course, the kids are not left out as there are facilities like the swimming pool with inflated balloons. Furthermore, there’s a top class restaurant is available to cater to the abundance r to your food cravings.

Agodi gardens hosts most picnics in the city of Ibadan as its garden is very pleasing to visit duringthe day and also late in the evening. Nature is redefined at Agodi Garden.

Even if you are a lover ofwildlife, agodi garden never disappoints has it hosts a range of friendly wildlife for your viewing pleasure.

There are a number of timber play structures and water parks that can be found within Agodi Park and Gardens. You can be assured the children will have an exciting time with various physical activities to engage in.

From Looyee Apartments at Eleyele, take a cab to Mokola and from there, you take another Cab to Agodi.

Your Ibadan experience isn’t complete without a visit to Agodi garden.